Why do I care about integrated marketing? And why do I think that nonprofits should take it seriously? Well, round these parts we are pretty obsessed with monthly giving. And who wouldn’t be, given how very valuable these donors are over their lifetime of support?

So, we need to get our monthly asks featured in all our donors’ channels of choice.

Here are a couple of fabulous monthly donor campaigns launched in-house recently by two of my all-time favourite organizations:

Last spring, Ecojustice (think David to industry and government’s Goliath) launched a drive for new monthly supporters.  “There’s a hero in YOU,” Ecojustice told its supporters. “Join our lawyers and monthly donors and become a Defender today.”

Ecojustice featured one of their staff lawyers, who frequently finds himself in court, standing up to big oil and gas companies with their vast legal teams and bank accounts. Ecojustice lawyers know first-hand how long it can take for a lawsuit to wind its way through the court system. And how instrumental committed, monthly gifts are in funding those cases.

They also featured other monthly donors and clients, who bore witness to the impact and importance of Ecojustice’s work, and the compelling reasons to become a monthly supporter.

The monthly giving drive had all the ingredients of success:

A kind donor also agreed to match all new monthly donations until the end of the year.

Through a well-executed combination of email, telephone, and online video, Ecojustice smashed through all its targets, recruiting 150 new monthly donors. 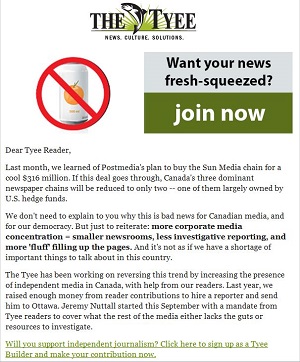 Another personal favourite is the Tyee Builder campaign. Swimming upstream against media consolidation, The Tyee is an independent online magazine that publishes news, reviews and commentary not typically covered by Canada’s mainstream media.

As you can imagine, along with such independence comes smart, self-imposed restrictions on advertising and corporate support. So The Tyee has long turned to its readership to keep it going. Hence The Tyee “Builders” -- a group of dedicated readers who donate monthly to keep their favourite news source strong and free.

The Tyee launched their drive for Tyee Builders online, of course, carried in their own publication and by email to readers. But they didn’t stop at asking their readers for support:  “Don’t worry. This isn’t another ask for money. This time, we want your friends. And family. And colleagues.”

At half-way to their $100,000 goal, Tyee fundraisers launched the friend-get-friend portion of their campaign. Equipped with their own personal URL (PURL), readers were invited to convince their friends to join, with the incentive that for every new Builder recruited through the reader’s PURL, the reader would be entered to win a fabulous weekend getaway to Tofino on B.C.’s wild west coast.

Today, there are more than 900 monthly Tyee Builders, increasing The Tyee’s freelance reporting budget by close to $120,000 and fully funding a Tyee national reporter in Ottawa. As they say, that’s no small fry.

You can check out these two fabulous organizations at www.ecojustice.ca and www.thetyee.ca.  Who knows? Maybe you’ll be inspired to create your own integrated, monthly giving campaign!