Online communities represent a huge untapped pool of potential donors.  And, with the increasing cost of acquiring new donors through traditional channels, more and more nonprofits are looking at their online supporters as a means of acquiring new donors. But, there are some pitfalls to avoid and key actions to be taken which will increase the probability of success.

The first step would be to identify the target audience you want to reach online and create the necessary social networking opportunities. The key in this step is to make it simple and easy – one issue linked to one action. There are number of ways to acquire online supporters including petitions, pledges, surveys and registration for information, newsletters or events.  You can create these opportunities internally or use 3rd party vendors.

From the start, you should segment your online supporters as much as possible – this will ensure that you are able to determine which online communities represent best opportunities for conversion. Also, it’s always a good idea to make sure that you have a box to check if over 18 – a lot of online petitioners are younger and likely not your target for fundraising. Based on our experience, if done right your odds are good this approach will work for you, but you won’t know what works until you try it!  And above all, test, test, test.

The single most common error we see is that organizations do not capture enough information to be able to communicate with their online supporters offline. You should collect more than email address and postal code. We highly recommend you get street address (mainly so you can use a match service to find their phone number) and include a comprehensive opt-in clause.  Ideally, you would also capture phone number.

One recent highly successful online conversion campaign Stratcom conducted was with LeadNow. With a list of 20,000 online acquired supporters, LeadNow generated over 800 new donors of which over one-third were monthly givers at a net cost of only $14.36 per new donor.

And remember, just because someone came to your organization online does not mean that is the only way you should communicate with them. Supporters want to be communicated with in a multi-channel approach, so you should reach out to them online and offline (phone and direct mail). And the reality is your best online giving tool is the phone.

So while many organizations think the way to raise money from online donors and contacts is to email them (which you should do of course), the much more significant fundraising opportunity, including obtaining monthly donors, is going to come from phoning them.

If you are worried that asking for too much information will decrease participation in your campaign (which is a risk), then develop a 2 screen landing page model that captures basic information on the first page and more detailed but optional information on a second screen.

To move from participant to donor you need to build a relationship before doing any fundraising. The relationship should start with a thank you. We generally recommend an e-welcome series of 4-8 communications that include more information about your organization, newsletters, any direct mail communications you send to your donors, subsequent calls to action and ultimately a soft donor ask.

As mentioned above, there is a synergy between online and the phone, and that’s where most of your revenue will come. So after engaging the supporter for 4 to 8 weeks, you should phone them to become donors and even monthly donors!

How to maximize the response rate

There are a number of factors which will influence the response rate including:

What results can be expected

At Stratcom, we have conducted many telefundraising campaigns to convert online supporters to donors, and the results have varied considerably depending on campaign, although usually very successful. Ensuring that the factors that influence response rates (as outlined above) have been incorporated into your strategy is key to achieving successful results.

The following is a sampling of 20 different campaigns and their response rates. 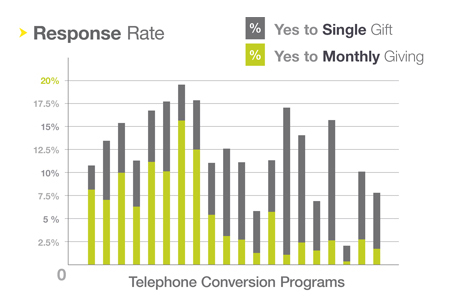 Other metrics that should be analyzed (as with all fundraising campaigns) include: