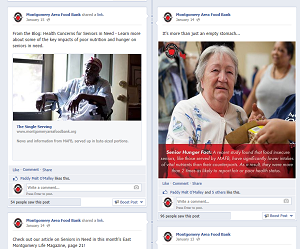 The Montgomery Area Food Bank (MAFB), a nonprofit organization serving senior citizens in Alabama, recently put a “young” spin on an “old” program – and found gold: The MAFB was recognized with a 2014 IMAB Integrated Marketing Award.

The MAFB improves the lives of more than 330,000 people every year, providing free food to individuals and families in need by distributing groceries and other necessities, and partnering with more than 800 agencies. The Senior Supplement Program, one of MAFB’s many life-changing services, provides nourishing food to elderly citizens across Alabama. Each month, all participating seniors receive a box filled with 25 to 35 pounds of nutritious food carefully selected for the special needs of older citizens.

But at one point, this relied-up service was in jeopardy – the Senior Supplement program had been struggling, and with funding so low, any hopes of program expansion were put on hold indefinitely – MAFB has not been able to add any new seniors to the program in over a year.

Finding Gold in Something Old

The MAFB realized they had to make a change to achieve their goals of increased engagement and overall support for the Senior Supplement Program. In their new strategy, MAFB switched the focus of their marketing, to call attention to the program itself and allow supporters to get to know the seniors they serve. The MAFB did this by sharing personal stories from participants, a smart way to educate donors on how the Senior Supplement Program profoundly improves the lives of seniors in need. The MAFB also began showing program-specific donors results to acknowledge the impact of their gifts and foster an emotional connection between the donor and the seniors.

To share their stories and increase awareness of the Senior Supplement Program, the MAFB switched to social media. Typically known for its influence on a younger audience, the MAFB opted to use social media channels to put a young spin on an old program, with hopes of reaching new followers and growing support. Staff dedicated one month to using Facebook, Twitter, and the MAFB blog to promote stories, facts and information about the seniors they serve. On Facebook, MAFB posted compelling images with facts summarizing the serious health concerns facing seniors who are malnourished. On their blog, the MAFB posted persuasive stories, one of which was written about an 81-year-old woman whose medical conditions did not allow her to digest solid foods.

The social media strategy was complemented by a matching grant opportunity: all first-time donors or donors who increase their giving (by dedicating gifts to the Senior Supplement Program) had their donations matched with a $10,000 gift.

In addition to expanding their social reach, the MAFB saw increases in overall visitors to their website and click-throughs driven from social media posts. In June of 2014, the Senior Supplement program increased the number of participants served by 6%, and this growth is forecasted to continue. On social media, the MAFB saw a 5.6% increase in Facebook likes, and an impressive 33% increase in Twitter followers in May and June of this year.

Last, but perhaps the most meaningful, the organization saw growth in their monthly recurring donations, adding 7 new monthly donors in 2014, two of which contribute directly to the Senior Supplement program.

The MAFB showed that social media is a powerful platform and useful for integrated campaigns when part of a strategy. These initiatives proved that knowledge is power – when supporters know more about the program’s depth and true impact of their gift, they develop a stronger connection to the organization’s mission and are more likely to stay engaged and give again. And while the Senior Supplement Program caters to older citizens, it is in fact, young at heart.