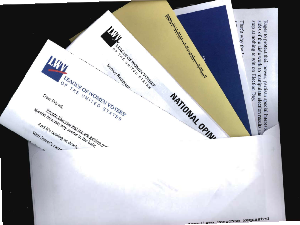 As one of the 2014 IMAB Integrated Marketing Award winners, the League of Women Voters’ 2012 emergency response campaign is one we all can admire.

Prior to the 2012 elections, when United States voter ID laws began to gain momentum, thus threatening the rights of voters, the League of Women Voters quickly took action. This nonpartisan political organization, which represents more than 100,000 members, supporters, and activists, launched a fully integrated emergency appeal and acquisition campaign to take on the 2012 “War on Voters.” And they didn’t just round first base with this one — they knocked it out of the park.

This home run was a comprehensive, cross-departmental campaign that saw success in both acquisition and appeal packages, including a 127 percent lift in response rate for acquisition. It not only continues to hold steady as the organization’s new control package, but it has also grown the League’s file size by 55 percent in the three years since its inception.

This crowning achievement didn’t come easily. Though the fundraising opportunity did present itself while the “War on Voters” was receiving media attention, what truly made the campaign a winner was their ability to overcome challenges between departments, instead coordinating efforts and demonstrating internal communications to help the campaign to reach its full potential.

The League’s development group worked closely with its Political and Communications departments to ensure all were involved in the progression of the campaign. The League’s development team demonstrated the benefits of such internal collaboration through donor value studies, and in the end, all groups collectively agreed to include some activist lists in the direct mail acquisition and email efforts. This proves the League’s development team worked with their colleagues to show that team work can make a campaign more successful for all who join the game — to better meet and surpass the organization’s goals with no department missing opportunities or striking out.

Winning the War on Voters

The League’s acquisition mailing included a National Opinion Survey with an ascending ask string. Overall, the package performed impressively, with a 127 percent increase over the previous control and a 1.10 percent response rate that held steady the following year. Even more notable, the package resulted in the League’s highest amount of 0–12 month donors in more than 10 years, and it shows no sign of slowing down: the package didn’t lose any steam post-election, holding a 1.60 percent response rate.

If not another home run, the appeal package slid effortlessly into third base: The response was equally inspiring, raising more than $170,000. The letter replicated an internal memo marked “urgent” from the League’s executive director to the League’s president, used a descending ask string, and mailed in an official carrier to ignite a sense of urgency in the donor. This proved successful, increasing the response rate from the anticipated 4.17 percent to a remarkable 7.59 percent.

Both direct mail efforts were complemented with corresponding email messages sent before and after each package, and a phone call the following month rounded out this integrated campaign.

And the Game Goes to … the League of Women Voters

Overall, the League of Women Voters’ fundraising program is fully integrated, incorporating email, phone calls, and telemarketing to supplement their direct mail program. The success of the League’s “War on Voters” emergency response campaign proves this organization can overcome internal challenges in the locker room to react swiftly and successfully, and hit home runs that benefit their members and supporters, and their bottom line.